Balancing Act: How Mompreneurs Can Have It All 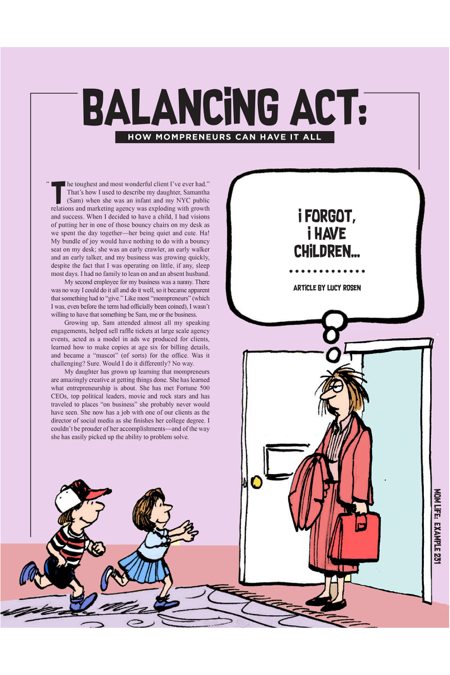 03 May Balancing Act: How Mompreneurs Can Have It All

he toughest and most wonderful client I’ve ever had.” That’s how I used to describe my daughter, Samantha (Sam) when she was an infant and my NYC public relations and marketing agency was exploding with growth and success. When I decided to have a child, I had visions of putting her in one of those bouncy chairs on my desk as we spent the day together—her being quiet and cute. Ha! My bundle of joy would have nothing to do with a bouncy seat on my desk; she was an early crawler, an early walker and an early talker, and my business was growing quickly, despite the fact that I was operating on little, if any, sleep most days. I had no family to lean on and an absent husband.

My second employee for my business was a nanny. There was no way I could do it all and do it well, so it became apparent that something had to “give.” Like most “mompreneurs” (which I was, even before the term had officially been coined), I wasn’t willing to have that something be Sam, me or the business.

Growing up, Sam attended almost all my speaking engagements, helped sell raffle tickets at large scale agency events, acted as a model in ads we produced for clients, learned how to make copies at age six for billing details, and became a “mascot” (of sorts) for the office. Was it challenging? Sure. Would I do it differently? No way.

My daughter has grown up learning that mompreneurs are amazingly creative at getting things done. She has learned what entrepreneurship is about. She has met Fortune 500 CEOs, top political leaders, movie and rock stars and has traveled to places “on business” she probably never would have seen. She now has a job with one of our clients as the director of social media as she finishes her college degree. I couldn’t be prouder of her accomplishments—and of the way she has easily picked up the ability to problem solve.

I often think back to those early days of me multi-tasking—finishing a client proposal while simultaneously working side-by-side with her as she did her homework at the kitchen table. In addition to English, math and science, Sam learned a lot at that kitchen table, including the just-as-important lesson that women are amazing multi-taskers, that they can successfully manage both a home and a business…and that being a mompreneur can truly be a way to “have it all” and then some.