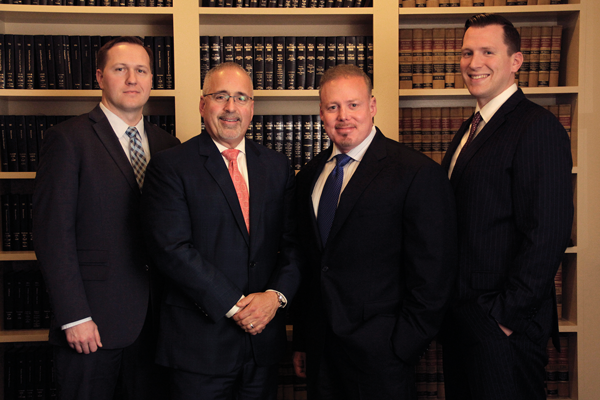 Mineola, NY, September 21, 2016 — Rick Collins and Marc Gann, founding partners at the Mineola, Long Island law firm of Collins Gann McCloskey & Barry PLLC, have each been named New York Metro Super Lawyers for 2016. Collins and Gann join only 5% of attorneys in the state selected by Super Lawyers Magazine for this honor – which selects attorneys using a rigorous, multiphase rating process.

In addition to the inclusion of Collins and Gann on this year’s NY Metro Super Lawyers, the firm’s two new partners, Gerard McCloskey and David Barry, have also been recognized by Super Lawyers Magazine. Both have been named to the NY Metro 2016 “Rising Stars” list, an honor received by less than 2.5 percent of top up-and-coming attorneys in New York who are either 40 years old or younger, or in practice for ten years or less.

“We are honored that all four of our partners have been recognized by Super Lawyers Magazine this year and selected to the lists of both the New York Metro Super Lawyers and New York Metro Rising Stars,” said Collins, who concentrates his practice in the area of dietary supplements law and criminal defense and is one of the country’s top legal authorities in the area of anabolic steroids. “This year was an important year for us as our firm expanded into new practice areas and added new partners, and we are so pleased that each partner has been recognized with this honor,” added Gann, a highly regarded New York criminal defense attorney who was also named to last year’s list of New York Metro Super Lawyers.

Collins Gann McCloskey & Barry PLLC (www.cgmbesq.com) emerged from the longtime Long Island-based law firm of Collins, McDonald & Gann in January, as former partner the Hon. Robert (Bob) McDonald, who is now serving in the prestigious role of New York State Supreme Court Justice and who was also named multiple times to the list of New York Metro Super Lawyers, ascended to the bench. In addition to the firm’s concentration in the areas of criminal defense, dietary supplements law, steroid law and personal injury law, the firm has also further expanded into the area of elder law through an Of Counsel relationship with the Ansanelli Law Group, a Long Island elder law firm.

Since its founding in 1990, the firm has been the recipient of numerous awards and recognitions. In addition to being recognized numerous times by New York Metro Super Lawyers, the partners have been awarded the AV Preeminent Peer Review Rating from the Martindale-Hubbell directory of lawyers, their highest honor.  Each of the partners also serves as Adjunct Faculty at law schools throughout the region, including Hofstra Law and Touro Law, and they are each active in a number of local and national professional organizations where they have all held leadership roles.  Marc Gann is a former president of the Nassau County Bar Association (NCBA), and Rick Collins currently serves as NCBA Treasurer.

Super Lawyers is a rating service of outstanding lawyers from more than 70 practice areas who have attained a high-degree of peer recognition and professional achievement. The Super Lawyers selection process includes independent research, peer nominations and peer evaluations by practice area. Each candidate is evaluated on 12 indicators of peer recognition and professional achievement with selections made on an annual, state-by-state basis.