Public Service Announcement: There’s no such thing as FIRST ANNUAL 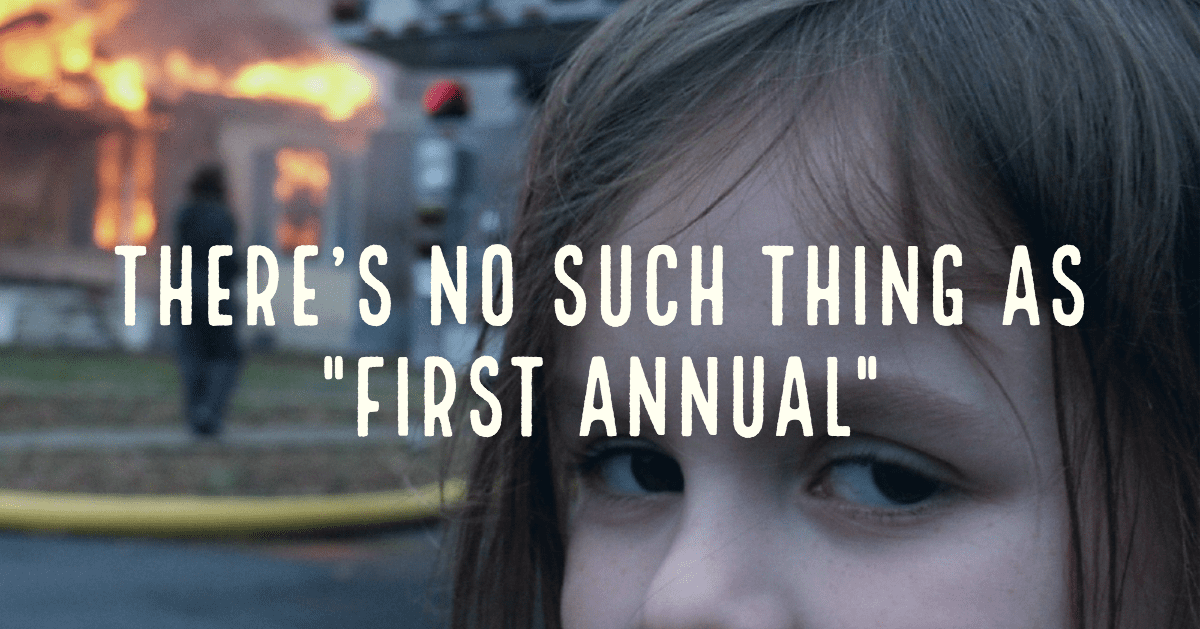 Posted at 20:15h in Business Development by SmartMarketing Communications 0 Comments

Though likely used with the best intentions – we’ve got to break it to you… there is NO SUCH thing as a first annual. We see it all the time, the DIYers (and even those that should know better) doing their own events and calling them (gasp) “The First Annual…. Whatever” — Block party. Wine Tasting. Soiree. Fundraiser… and it’s got to stop. There is no first annual. There is however, a First Ever.  You can host and hold a First Ever event or happening, but if you want to be taken seriously and look like you know what you are doing—stop using First Annual.  You can even be presidential and call it inaugural… meaning it’s the first ever, and you are hoping that your event will continue past the first year.  Let’s break it down:

Inaugural – Marks the beginning of an institution, activity, or period of office. It implies a formal beginning.

Annual – Occurring once every year.  Nothing is considered annual unless it’s happened twice. Until the second occurrence, it’s merely just a one-time event.

With these definitions, it just isn’t possible to have a first annual if it has not occurred before.

Not to jinx you, but what if you plan an event and it doesn’t end up continuing into next year and the year after?  Or, what if it turns into a semi-annual or a seasonal event? First Annual, when used in a press release is pretty much guaranteed to be rejected by newspaper editors because it’s not a supported fact and doesn’t describe the present state of affairs, which reporters should report. The proper term is Inaugural. Smart marketers will even say ‘first of a planned series of annual’ but remember, until the event has occurred twice, it isn’t actually being held annually.

We applaud those who are doing FIRST-ever events and happenings. Good for you…. Be first. But, until you have your FIRST ‘whatever’ completed and are looking towards the second year of your event, you just aren’t’ annual.