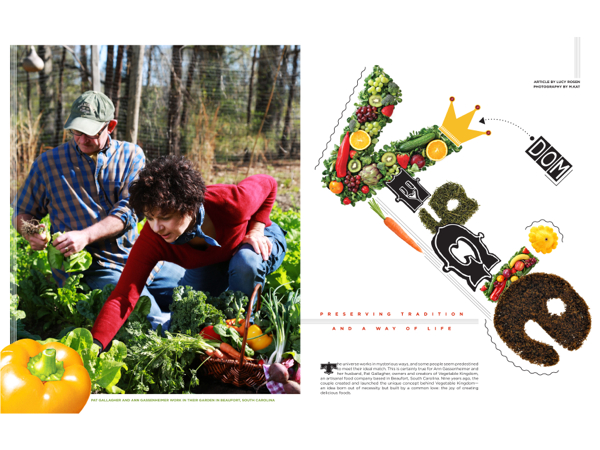 Pat Gallagher and Ann Gassenheimer work in their garden in Beaufort, South Carolina

The universe works in mysterious ways, and some people seem predestined to meet their ideal match. This is certainly true for Ann Gassenheimer and her husband, Pat Gallagher, owners and creators of Vegetable Kingdom, an artisanal food company based in Beaufort, South Carolina. Nine years ago, the couple created and launched the unique concept behind Vegetable Kingdom—an idea born out of necessity but built by a common love: the joy of creating delicious foods.

A wonderful Yiddish word, bashert, meaning “soul mate” perfectly describes the partnership Ann and Pat have, in both marriage and business. They answer questions in stereo, finishing each other’s sentences like a practiced duet. You immediately sense that they are each other’s best cheerleader.

The couple has not always worked in the specialty food industry. When they met, Ann was working as a Reuters photographer, assigned to cover the White House and Camp David during the George H.W. Bush years. A friend introduced her to Pat, an architect and documentary filmmaker. The two connected instantly. Both were raised in the deep South yet ended up in Washington, D.C., which felt like kismet. They married, moved back South, and raised a child together. In 2008, they created Vegetable Kingdom.

“When we decided to change careers and re-invent ourselves, it was a natural leap to go back to what we both knew and loved: healthy, homemade food,” Ann said. “Preparing and eating good food was a huge part of life for both our families.” Her great grandfather was known for having the “best victory garden in Shreveport, Louisiana.” Her great grandmother was known as the “tomato pickle lady.” And her grandmother created the now-famous recipe for quince marmalade, the inspiration behind Vegetable Kingdom’s own Kumquat Marmalade, which is still made by hand.

If you’ve ever seeded a kumquat, “labor intensive” doesn’t even begin to describe it. But doing it the old-fashioned way is the essence of what makes Vegetable Kingdom products so special. The Kumquat Marmalade is also unique because of the hidden kumquat tree Pat and Ann discovered in the yard of a Beaufort neighbor. They asked the owner of the house for some of the fruit, explaining that they wanted to carry on a long family tradition of jam and jelly making. Ann and Pat are so particular about their craft that, to this day, this is the only kumquat tree they will use for their marmalade. Pat calls it “a magical tree.”